They were the most famous sisters in China. As the country battled through a hundred years of wars, revolutions and seismic transformations, the three Soong sisters from Shanghai were at the centre of power, and each of them left an indelible mark on history.

Red Sister, Ching-ling, married the ‘Father of China’, Sun Yat-sen, and rose to be Mao’s vice-chair.

Big Sister, Ei-ling, became Chiang’s unofficial main adviser – and made herself one of China’s richest women.

All three sisters enjoyed tremendous privilege and glory, but also endured constant mortal danger. They showed great courage and experienced passionate love, as well as despair and heartbreak. They remained close emotionally, even when they embraced opposing political camps and Ching-ling dedicated herself to destroying her two sisters’ worlds.

Big Sister, Little Sister, Red Sister is a gripping story of love, war, intrigue, bravery, glamour and betrayal, which takes us on a sweeping journey from Canton to Hawaii to New York, from exiles’ quarters in Japan and Berlin to secret meeting rooms in Moscow, and from the compounds of the Communist elite in Beijing to the corridors of power in democratic Taiwan. In a group biography that is by turns intimate and epic, Jung Chang reveals the lives of three extraordinary women who helped shape twentieth-century China.

“Chang strides over a century of world-shaking events with all her storytelling flair and fluent command of original sources . . . [An] epic tale.” (i)

“Big Sister, Little Sister, Red Sister is a monumental work, worthy both of Jung Chang’s Mao and of the great, rambling, heterogeneous Chinese folk epics of the oral past, such as The Water Margin and The Three Kingdoms. Its three fairy-tale heroines, poised between east and west, spanned three centuries, two continents and a revolution, with consequences that reverberate, perhaps now more than ever, in all our lives to this day.” (Hilary Spurling Spectator)

“Outstanding… As with her previous books, most famously Wild Swans, it is Chang’s sympathetic, storyteller’s eye ― her attention to deeply human detail during the most extraordinary circumstances ― that makes her work remarkable. Big Sister, Little Sister, Red Sister is another triumph.” (William Moore Evening Standard)

“The Soong sisters were an extraordinary trio… Jung Chang has shown, in books such as Wild Swans, her instinct for a compelling story, and that instinct stands her in good stead here as she weaves her way through the complex history of China … Well worth reading…” (Rana Mitter Sunday Times)

“Chang is too deft a biographer to tell you how to think. The sisters are sage and foolish, selfless and vain, brave and fearful, loyal and treacherous… It is up to the reader to decide if the Soongs are fairytale princesses or wicked stepsisters… The sisters were divided by politics, united by love. Even as you recoil from their actions, you are moved by their bond. In this lucid, wise, forgiving biography Chang gives a new twist to an old line. Behind every great man… is a Soong sister.” (Laura Freeman The Times)

“Utterly engrossing… It stars a trio of extraordinary women… Their gripping collective story reads like Wild Swans meets the Mitfords; and the history feels remarkably close to our own times too.” (Caroline Sanderson Bookseller)

“A remarkable story of war, communism and espionage related with nuanced sympathy… The lives of the three Song sisters – the subjects of Jung Chang’s spirited new book – are more than worthy of an operatic plot.” (Julia Lovell Guardian)

“Big Sister, Little Sister, Red Sister, written in a compulsive style that sweeps the story along, is much the fullest account of their remarkable lives available in English… The warts-and-all portrait of “the Father of the Republic” is a welcome corrective to
the conventional hagiography.” (Jonathan Fenby Financial Times)

“A riveting and action-packed story where it’s hard not to be enthralled by the murky underworld of the Soongs ― its numerous twists and turns are saturated with money, travel, history, corruption, treachery, risk, honour, glory, fear, deception, power, and politics.” (J.P. O’Malley Irish Sunday Independent)

“Chang adds another title to her series of lively depictions of key figures in Modern Chinese history . . . This accessible book will appeal to history buffs and biography fans in addition to those already familiar with the Chang’s body of work.”—Library Journal

“The book intertwines the intimate with the big historical picture, tying their personal stories to the deep and irreconcilable political divisions among them . . . it is stamped by her revisionist impulse.”—The Atlantic

“Chang seamlessly chronicles the lives and marriages of the Soong sisters in this captivating triple biography. . . . This juicy tale will satisfy readers interested in politics, world affairs, and family dynamics.” —Publishers Weekly

“One of this autumn’s biggest reads, it’s an astounding story told with verve and insight”—Stylist

“The complicated history of China during this period is little-known to most Westerners, so this readable book helps fill a gap. By hooking it onto personalities, Jung Chang has been able to chart a comprehensible way through these decades and an immense mass of information that could otherwise be difficult to digest.”—Washington Times


“In the hands of master storyteller and contrarian Jung Chang, the old tale finds a new interpretation by one who knows well the intricacies of family, influence, gender, and power in modern China . . . A provocative view of the historical times that produced these extraordinary sisters”—Air Mail 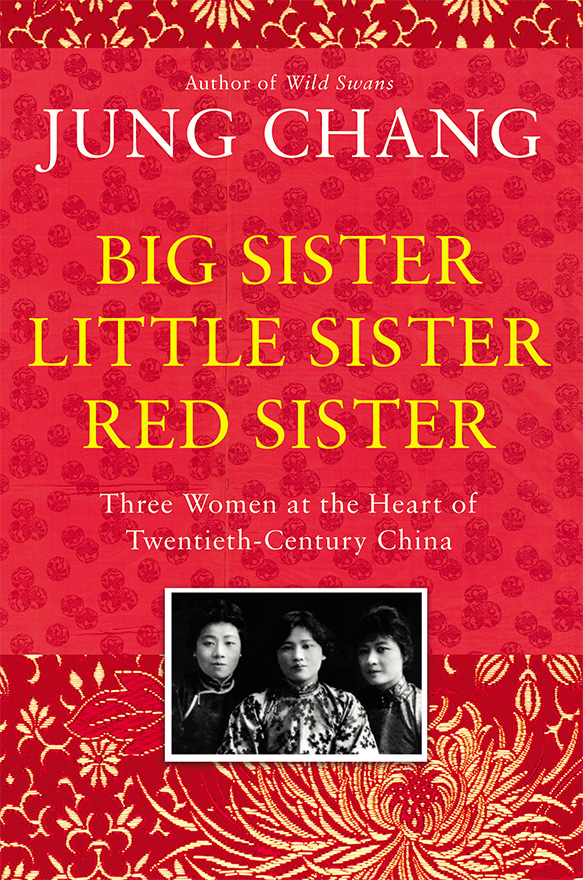